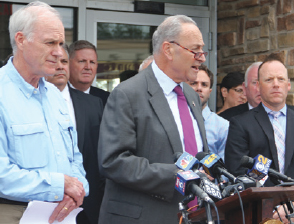 While South Farmingdale Water District has not been impacted by the plume to date, advanced detection measures and preventive maintenance procedures have long been in place, and the SFWD is prepared for the plume as it continues its path toward the District.

SFWD regularly conducts some of the most stringent testing. Water from all 11 wells are continuously sampled and tested regularly to ensure ongoing water quality that meets all local, state and federal standards. These wells are visually inspected daily, with any irregularities being handled immediately. Preventive maintenance of infrastructure is ongoing day in and day out. This includes regular, periodic inspection of all infrastructure…from ground storage and elevated tanks, to fire hydrants, emergency generators and over 125 miles of water main. The condition of SFWD water meets all standards set by the New York Department of Health, Nassau County Department of Health, and the Environmental Protection Agency (EPA).