United States Senator Charles E. Schumer (D-NY) and the South Farmingdale Water District (SFWD) today issued a strong request for the United Sates Navy and Department of Justice to immediately follow through on the Navy’s obligation to pay for the capital and operating costs necessary to build and operate water treatment facilities at two South Farmingdale public water supply sites that will be impacted by contamination.

The United States Navy operated the Naval Weapons Industrial Reserve Plant in Bethpage, New York for several decades that resulted in soil and significant groundwater contamination containing volatile organic compounds. The SFWD was approached in November 2000 by the United States Navy relative to a widespread groundwater contamination plume* flowing in a southerly direction toward several SFWD well fields. The Navy developed a water contingency plan in connection with New York State Department of Environmental Conservation (DEC) that resulted in the Navy constructing outpost monitoring wells upgradient of Plants 1 and 3 in SFWD.

The Navy agreed that if contamination from their site was identified in the outpost monitoring wells that they would pay for all future costs that the water suppliers would incur for the required treatment facilities or abandonment and replacement of the respective wells. In 2004, the outpost monitoring wells upgradient of Plants 1 and 3 indicated that they were impacted by contamination from the naval plant site at levels above the trigger values agreed to by the Navy, DEC and SFWD. 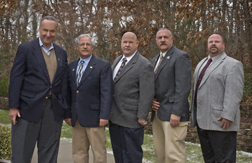 The SFWD has been pursuing a settlement with the Navy for nearly five years and while the Navy has been in general accord with the necessary treatment facilities, final resolution and execution of the settlement agreement has simply not been a priority within the US Department of Justice.

This concerns the officials at SFWD because the contaminants are “knocking on our door,” in the words of Business Manager Len Constantinopoli.

In the interim, the SFWD Board of Commissioners have continued to express their concern that one or more of the District’s wells may be impacted before it can design and construct the treatment facilities that all parties have agreed are necessary, despite the fact that currently, all water served by the District is safe to drink.

The water treatment systems proposed would provide the same quality of water consumers enjoy today, but action has to take place as soon as possible. The District cannot defer the construction of treatment facilities any longer waiting for the United States Navy to provide the funds needed to meet this critical need.

While the SFWD Board of Commissioners intends to work diligently with Senator Schumer’s office to expedite the final agreement with the U.S. Navy, two plans of action have been put into effect by the District to protect its water supply and to shield its consumers from paying for the treatment facility.

First, SFWD has been approved to bond up to $18 million to begin design and construction of the necessary treatment facilities. If the treatment facilities are not constructed in time, there is the potential that SFWD would need to close down or restrict wells at Plant Nos. 1 and 3. The four wells at these two sites provide nearly 40% of the District’s well capacity, which are needed to meet existing water supply and fire flow demands. The loss of any of these wells could adversely impact SFWD’s ability to meet peak and emergency pumping requirements, thereby impacting the ability to deliver an adequate water supply to its 45,000 consumers. While the District would prefer to have the money in hand from the Navy prior to building the treatment facilities, it can no longer tolerate any further delays and must proceed with the project. All proceeds associated with the capital cost portion of the settlement will be used to pay for treatment, thereby minimizing any cost burden on its taxpayers.

Second, The District met with civic associations and asked for their help. These community-minded groups provided a tremendous amount of support and positive action that has helped augment SFWD efforts during these proceedings. With the help of Senator Schumer, the SFWD Board of Water Commissioners, elected officials and civic organizations, SFWD is looking for the US Department of Justice to resolve this matter quickly and without hesitation.